For the 2016 Great Philadelphia Comic Con, I wanted a costume that wasn’t incredibly time-consuming or expensive to make, but still allowed me to be creative. I had recently purchased a stunning green velvet dress from Lindy Bop, and it prompted me to create a film noir femme fatale-inspired version of DC’s Poison Ivy. As I already had the red hair and the green dress, the accessories were the fun part. The look I went with is situated somewhere between 1930 and 1950, and inspired partly by Melanie Laurent in Inglourious Basterds and partly by Marlene Dietrich in Shanghai Express (with some Myrna Loy and Carole Lombard for good measure). I made three hats before deciding on the last hat. The half-hat is made of ivy leaves from a dollar store, hot glued to a frame made from a paper plate. I attached a green birdcage veil to it to complete the look. The stole is also made of ivy leaves from the dollar store, hot glued to some leftover black satin I had lying around. I was really happy with the way that one turned out! The shoes were black shoes that I decided were finally ready to retire after nearly 10 years of wear. I painted them a shimmering peridot shade, decorated it with even more dollar store leaves, and twisted the wire-lined stems and attached them as faux straps. I have a feeling they will be part of other costumes in the future. 🙂 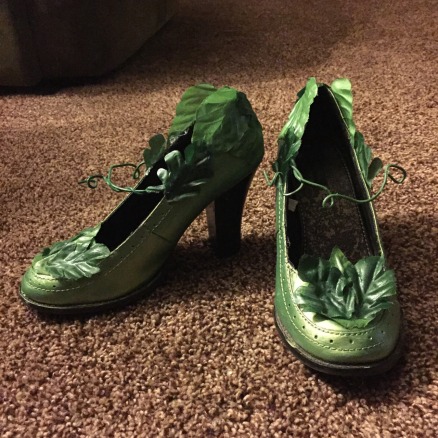