This one isn’t a major project, more or less just fun. 🙂

A while ago (February 6, 2016, according to my Instagram), I purchased a tape dispenser from Target. It was a gold-tone Frenchie, with tape that you ripped off right above the butt.

It had a derpy face that made me laugh, and I just had to get it, knowing that it would add some cheer to my desk at work. And that she did! I named her Frances, because to me she just looked like a Frances. I didn’t think about the fact that she was now Frances the Frenchie until after I named her.

Frances was never a great tape dispenser (You have to hold the tape roll down as you pull, or you’ll pull it right out of the dispenser and the roller it rests on will fly out and make you look like a giant moron.)

However, what she lacked in that function, she made up for in decor enhancement and being a paper weight.

She received a temporary modification to make her a stamp dispenser, and hung out with celebrities on the regular.

Frances took a dive sometime after my shift on Tuesday, so I came in Wednesday 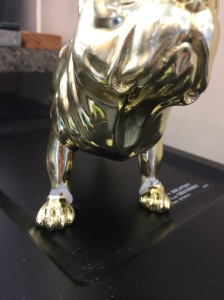 A note was left explaining the circumstances of Frances’s leap. Compensation was also offered. This was declined, as she was still as functional as she ever was. After I glued her feet on, there were still chunks out of the paint, so I decided to give her a makeover. Here is the rebirth of Frances the Frenchie tape dispenser into Frances the Purple Phoenix tape dispenser. 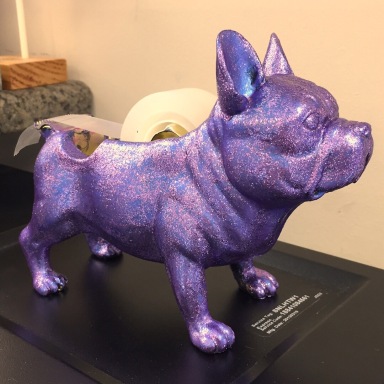 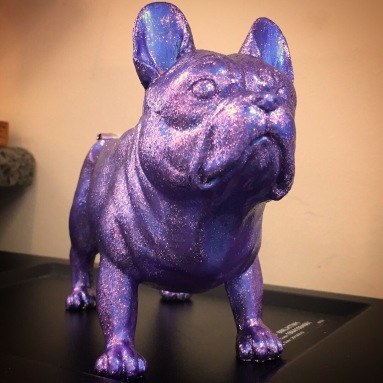 The paint I used is Folkart Color Shift Gloss Finish Metallic Acrylic Paint in Purple Flash with Martha Stewart Crafts Multi-Surface Glitter Acrylic Craft Paint in Charoite. I’m happy with the results, and even more so, I feel good that I’ve made the best of a lame situation! Frances is now a glittery reminder to make lemonade with the lemons I am handed.