Rick and I borrowed my brother’s fancy camera and headed out to the only thing nearby that looks like a Borderlands landscape… a quarry!  We went after business hours to take some photos of our Borderlands 2 cosplays. (Outside of the fence, because we’re not trespassers, and quarries are dangerous!) Some are blurry, as we’re not all that familiar with the fancy camera. All pictures of my Gaige costume were taken by Rick, and all pictures of Rick’s Deathtrap are taken and photoshopped by me. I took Rick’s legs out of most of the pictures to make Deathtrap look more like Deathtrap… a floating robotic torso! I painted (admittedly slapdashedly) a Nerf Zombie Eraser to look like a Dahl Hornet. (It actually shoots green silly string, so it’s like a Dahl Hornet that doesn’t actually corrode people!) Un-photoshopped image where you can see Rick’s legs. 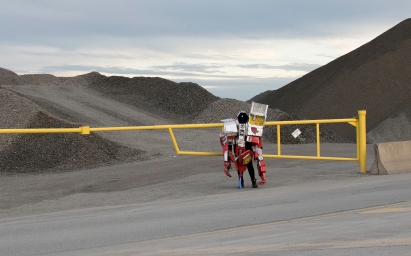 Gaige by the fence.

Close-up so you can see my cell-shaded face.

The back of my costume.